Are You One of the Next Data Scientists?

If you don’t know what applied data science is, you really should – so says Sepideh Chakaveh, the applied data scientist who recently ran a groundbreaking 10-week Continuing Education course offering a comprehensive grounding in this blossoming interdisciplinary field.

‘Data is of huge significance as it forms the quintessential building block of the information age,’ says Dr Chakaveh. ‘Many believe that data will be the next global currency.’

Every day, each and every one of us generates vast amounts of data, every time we use our mobile phones, access the web, visit social network sites, use our credit cards or travel in our cars.

Imagine all the data you produce, and then multiply it by several hundred million people across the world who also generate the same amount of data. Each day, the colossal amount of data gets larger.

The fodder of fake news – or a valuable resource?

In our modern world we are swamped by information (data), yet we also live in a time of ‘fake news’. Applied data science - which allows us to analyse, communicate and reformulate raw data in order to extract conclusions about information - is already used by governments and organisations to make better and more informed decisions and to verify or disprove existing models, processes and theories. It can also be used more controversially, as in the recent Facebook data mining scandal.

It’s now more important than ever for individual citizens, too, to be able to interpret everyday data accurately.

The first students on the new applied data science course, launched last Michaelmas term, had no or very little previous experience in the field of data science. It’s important, Dr Chakaveh thinks, to ‘enable people from all walks of life to be able to learn about this very important field and subsequently be able to use it for their individual benefit.’

Course alumni will also be well-primed if they want to work professionally in the field. Chakaveh points to a recent study by the McKinsey Global Institute which concludes: ‘a shortage of the analytical and managerial talent necessary to make the most of Big Data is a significant and pressing challenge’.

Being able to create visual pictures of data allows society to solve problems and tell stories with impact.

Global warming is a classic example of the importance of applied data science. It’s a subject people have strong opinions on – but not everyone has actually interpreted the raw data. Exploring global-warming data made an ideal project for the students in the first cohort of Dr. Chakaveh’s course.

Over the course of ten weeks, the 20 students worked on a large climate data set from the Met Office, covering the British weather since 1850. The students produced informative and sobering visualisations from the data – and so effective was their interpretation that the Met Office requested to have some of the analysis the students  produced.

Students on the course were divided into three groups – Lovelace (the first female British data scientist), Turing (no explanation needed), and Michie (one of the founders of machine learning and artificial intelligence) – to read and create visualisations of the climate data. Each group had a different focus and between them, the teams’ work addressed climate change and sought to answer questions from species migration to the future probability of a white Christmas in Oxford.

The Lovelace group looked at the effect of global warming by analysing how average winter temperatures have increased over time, making snow in winter less likely - Oxford in 100 years will be unlikely to have a white Christmas.

The Turing group examined mean UK temperatures over time and designed an interactive visualisation with the aim of communicating global warming to policymakers and the general public.

Finally, the Michie team worked using a hypothesis that warmer climates are migrating ever-northwards; they analysed data using the unit of distance rather than temperature. To know what London’s weather was like in 1900, they postulated, one should not consider London weather today, but rather the weather today in Manchester. This untested hypothesis of ‘climate migration’ was then applied to US climate data for the last century. 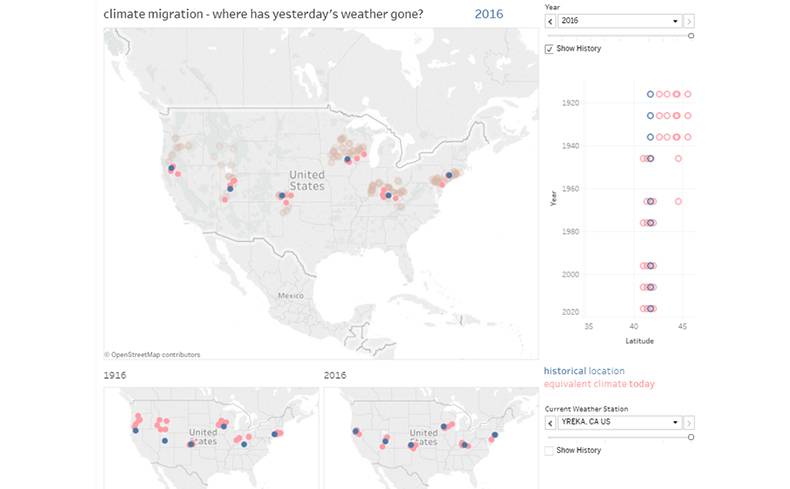 Overall, says Dr Chakaveh, ‘the overwhelming message was that in the last decade, global warming has caused temperatures to be increased for the month of November, followed by October. This has huge environmental consequences, the most prominent being wildlife migration.’

Iranian/British/German and so trilingual, Sepideh Chakaveh came to Britain from Iran to study at the age of 15 and studied Electronics Engineering and for a PhD in Experimental Astrophysics. Having worked as an astrophysicist at Imperial College, the Max Planck Institute in Heidelberg and the University of Goettingen, she worked for many years at the Fraunhofer Society in Germany as senior scientist and technologist, before returning to Britain to found and direct the Southampton Data Science Academy (the first ever UK online data science academy).

Dr Chakaveh, a member of Google Women Techmakers, the Open Data Institute, and the Fraunhofer Society, has worked as a part-time tutor at Continuing Education for eight years, mainly teaching on the Advanced Diploma in IT Systems Analysis and Design course – one of Oxford's few award courses which is conducted totally online.

Dr Chakaveh has a major interest in big data video analytics. Big data is what we call the voluminous amount of information we all generate daily; and increasingly it’s not just in the form of text, but in video format – every time we access YouTube or Skype, we are generating video big data. Analysing this dynamic kind of data is complex, and the challenge of doing so has led Chakaveh to develop two products for her own tech company, Pixsellar, including an interactive facial emotional analytics system called FALCON (Facial emotion Analytics for Live Connected Observational Networks). FALCON’s possible applications range from security to instant messaging to mental health analytics.

The next Applied Data Science course is expected to run in Michaelmas 2018. The first course was so popular that there were 30 people on the waiting list – so if you’re interested in signing up, please contact the weekly classes office.