As an undergraduate reading Medicine at Exeter College, Roger Bannister helped lay an athletics track at Iffley Road. A shy but popular young man born in 1929, he had started at Oxford in 1946, aged just 17, and, a passionate runner, been elected president of the university athletic club.

Soon afterwards, on 6 May 1954, he became the first person to run a mile in under four minutes, on the track he had laid.

Having retired from athletics aged 25, Bannister’s long and distinguished career as a neurologist brought him back repeatedly to Oxford University. He returned to Oxford for one of his first jobs, in surgery, and in the early 1960s Oxford awarded him a travelling fellowship to do research at Harvard. In 1985, he became Master of Pembroke College, a role he filled until he retired in 1993. Sir Roger died on 3 March this year, leaving behind his wife, the artist Moyra Jacobsson, their four children, and 14 grandchildren.

But there is something less well known about Sir Roger’s famous Oxford connection.

Starting in his late 70s, Sir Roger started to explore another path – that of a lifelong learner here at the Department for Continuing Education. He took short courses between 2007 and 2012, on topics including philosophy, international relations, history and climate change – and in 2009, Roger Bannister completed our Undergraduate Diploma in Creative Writing.

The fourth challenge in his life: creative writing

His tutors from the Creative Writing Diploma felt privileged to teach Sir Roger.  When short fiction tutor Dennis Hamley saw the list of second-year students he was to work with, he gulped at the very first name: Sir Roger Bannister. Hamley always asked students for a sample of their writing before the class started. Roger sent him two short stories, both about extreme sporting near-disasters, one on an Alpine mountain, the other sailing across the English Channel in rough weather. Both had three protagonists who worked as a team to escape disaster.

Bannister looked slightly surprised. ‘What do you mean exactly?’

‘Well, you led the ultimate successful trio. You, Chris Brasher and Chris Chataway.’

Bannister looked at Hamley for a moment. Then, Hamley recalls, Bannister said, explosively, ‘Ha!’ – and launched into an account of what really happened on that memorable day, which ‘differed in some important respects from the official versions, whether written by Roger himself, described by commentators or remembered in obituaries. I was staggered. I’d only known him for three minutes.’ Hamley added, ‘Oxen and wainropes, as Jim Hawkins said, will not drag that account out of me. He was a wonderful student, who seemed unaware of his iconic status.’

Bannister told Hamley that after the athletics, the medicine and the college mastership, the creative writing diploma was the fourth great challenge of his life.

To poetry tutor Jenny Lewis, he said that writing a villanelle was harder to achieve than breaking the four-minute mile and, on another occasion, that he had decided to study creative writing because he always needed a challenge. His tutors were impressed by his enthusiasm and dedication to every assignment, and also his amicable nature.

Frank Egerton, who taught Bannister long-form fiction, vividly recollects their first seminar, when Bannister, in a tweed jacket, engaged in vigorous and very funny discussion with the streetwise youngest member of the class, many decades his junior.

‘He was a formal but extremely warm and generous-natured man who brought a great deal that was positive, inspiring and thought-provoking to the class,’ Egerton recalls today.

Jenny Lewis celebrated Bannister’s 80th birthday with him in class at Ewert House, Summertown, breaking off from sonnet-writing for cake and champagne. ‘He was a wonderful addition to the class - modest, kind to others, humorous and interested in everything and everyone,’ she recalls.

Bannister’s creative work on the Diploma showed talent. In Lewis’s class, he wrote an ‘excellent’ long prose poem on growing up in Harrow. In his fiction workshops, he developed two ‘vividly realised’ stories. One, set in a prisoner of war camp in the second world war, involved Jack, previously an Oxford college scout. In the other, Hector, a decorated war hero, was, after four long years, at last going up to Oxford.

Ultimately, Bannister developed his stories into a novel set in post World War Two Oxford, centering on a fictional college, St Christopher's, which was struggling to uphold its ancient traditions and way of life in the face of rationing and new freedoms and energies. The dons' eating of grouse and other delicacies at high table, while students were having to make do with corned beef and boiled cabbage, wasn't going down well, not least because many students were former soldiers, who resented being treated as eighteen-year-olds. To add insult to injury, the governing body was dragging its feet over providing decent bathrooms for the students.

The Oxford of Roger's novel was one of tweed-jacketed stirrings of discontent, heated debate and occasional outbreaks of protest, complete with slogans and banners. ‘He was very good on the emerging tensions of the post-war era,’ recalls Egerton. ‘On the rise in numbers of state school educated students with fresh ideas and expectations who found themselves at odds with - and sometimes over-awed by - public school confidence and entitlement. There were rivalries between dons and colleges and skullduggery during student elections - plus ça change.’

Bannister was prepared to debate points of creative writing technique, Egerton adds - always with respect for the other point of view and with self-deprecating humour.

Every Friday morning, Dennis Hamley walked 25 minutes from his flat in Summertown to Roger and Moyra’s in Bardwell Road for their tutorials. The first time he arrived, Bannister asked, ‘Where have you left your car?’

‘Gosh, you must be fit,’ Bannister said.

Bannister and Hamley sat in a room lined with souvenirs, including the famous phrenology skull and a framed letter from President Kennedy. ‘We watched the two main characters, Jack and Hector, develop, saw their triumphs and, in Hector’s case, tragedies,’ says Hamley. ‘Especially memorable is Roger’s version of the origins of the Paralympics. He wrote a wonderful character sketch of Dr Ludwig Guttmann, the inspired genius of Stoke Mandeville. In the story Guttmann makes the connection between disability and sport by watching the now paraplegic Hector playing a primitive foreshadowing of wheelchair basketball with other patients.’

Manipulating characters to make struggle and resolution, the basis of all novels, was not easy for Bannister, Hamley says. A year later he received a bleak and ‘inevitable’ phone call.

‘I’m back from London after opening yet another sports centre. Term’s starting and my diary is full. After all, I am eighty. I’m afraid the novel has to go.’

The next time Hamley saw Roger was in Blackwell’s bookshop, signing his autobiography. “This is definitely my literary swansong,” he said. Soon afterwards, his Parkinson’s became public knowledge.

Dennis Hamley was one of the last people to see Sir Roger Bannister. On February 23rd 2018, Hamley and his wife Kay went to Oxford’s John Radcliffe Hospital to see a surgeon. As they entered, two paramedics wheeled in a stretcher with a patient on it. Kay said, ‘I’m sure that’s Roger.’

‘Do you remember me?’ Hamley asked.

‘Of course I do,’ Bannister replied and smiled.

Then the paramedics wheeled him away.

Today, Dennis Hamley still has Bannister’s drafts at home – and there they will remain, he says. 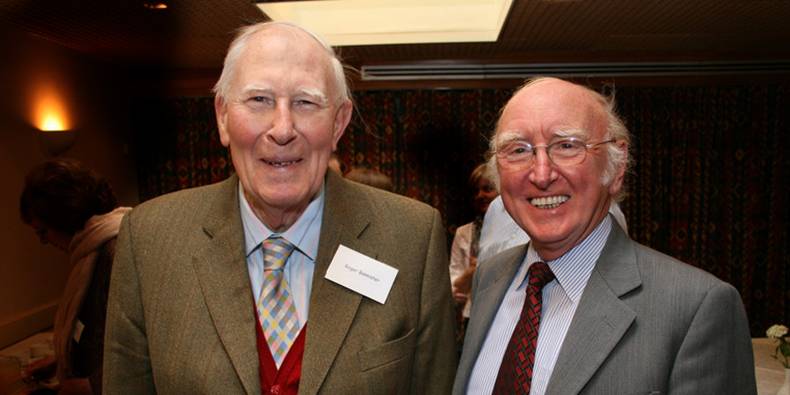