Architect, Patron and Craftsman in Tudor and Early Stuart England

The most recent volume in the Rewley House Studies in the Historic Environment series looks at the architecture of the English Renaissance: a blend of styles once derided as 'backwards' but now celebrated for its inventiveness and pioneering achievements.

Volume 6 - Architect, Patron and Craftsman in Tudor and Early Stuart England - comprises papers from the weekend conference held in Rewley House in 2016, in honour of Professor Malcolm Airs who taught at Oxford's Department for Continuing Education from 1975 to 2006. Professor Airs' scholarship has centred on the domestic architecture of the Tudor and Early Stuart Period, particularly on building processes and craftsmen.

In Tudor and early Stuart times, Gothic elements continued to be used but mixed with details inspired by Classical antiquity. This was the English Renaissance, but the systematic use of Classical models, and the publication of handbooks of Classical architecture, and the profession of architecture were all in their infancy.

The blend of styles is unique to England: while it used to be dismissed as backward it is today celebrated for its inventiveness and pioneering achievements.

Professor Airs’ friends and colleagues pay tribute to his scholarship in a series of essays on topics which have interested him. 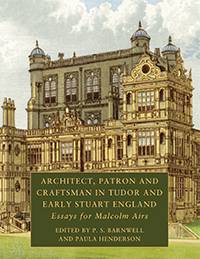 Thematic papers include Maurice Howard on painted panelling and furnishing, Claire Gapper on patrons, plasterers and architects, and Kathryn Davies on vernacular wall-paintings. The volume concludes with a discussion by Mark Girouard of his forthcoming biographical dictionary of architects of the period.

Architect, Patron and Craftsman in Tudor and Early Stuart England is the sixth volume in the Rewley House Studies in the Historic Environment series. Volumes 1-5 focus on a variety of topics, including the Medieval Great House, Country House Technology, the works of Sir George Gilbert Scott, and two volumes on Places of Worship.

Copies may be ordered from the publisher post-free within the UK, or through any bookseller. Please contact the publisher, Shaun Tyas: email: shaun@shauntyas.myzen.co.uk; telephone: 01775 821542; address: 1 High Street Donington, Lincolnshire, PE11 4TA