Two of the four annual lectures organised separately at the major early churches of Brixworth, Deerhurst, Jarrow and Whithorn have been given by members of the same university department - Oxford University Continuing Education - for what is thought to be the first time ever. 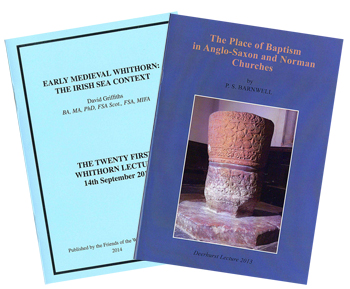 In The Place of Baptism in Anglo-Saxon and Norman Churches (30th Deerhurst Lecture), Dr Paul Barnwell, Director of Studies in the Historic Environment, explored changes in the location of baptism within church buildings during the 11th and 12th centuries, and related them to the development of sacramental theology.

Dr David Griffiths, Reader in Archaeology, gave the 21st Whithorn Lecture, Early Medieval Whithorn: The Irish Sea Context, in which he examined the relationship of 5th to 12th-century Whithorn to other settlements in southwest Scotland and around the Irish Sea.

Both lectures (which were delivered in September 2013) have just recently been published. Proceeds from sales of the lecture transcripts will be used to support further research and maintenance at St Mary's Church, Deerhurst, and for the Whithorn Trust.

Details for obtaining the published lectures are available online:

The Place of Baptism in Anglo-Saxon and Norman Churches by P. S. Barnwell (Deerhurst Lecture 2014) Price: £4.00 at: deerhurstfriends.co.uk/publications/