'Not just any new particle'

In July 2015 a research group at CERN's Large Hadron Collider reported the discovery of a new class of particles known as pentaquarks. 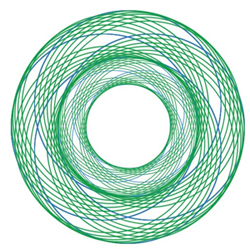 Professor Guy Wilkinson, who is one of the speakers at our 14th November CERN and the Future of Physics day school, is Professor of Physics at the University of Oxford and spokesperson for CERN's Large Hadron Collider Beauty experiment (LHCb) - the research team that found the particle in several years worth of data.

'The pentaquark is not just any new particle,' said Professor Wilkinson. 'It represents a way to aggregate quarks, namely the fundamental constituents of ordinary protons and neutrons, in a pattern that has never been observed before in over fifty years of experimental searches. Studying its properties may allow us to understand better how ordinary matter, the protons and neutrons from which we're all made, is constituted.'

Our understanding of the structure of matter was revolutionized in 1964 when American physicist, Murray Gell-Mann, proposed that a category of particles known as baryons, which includes protons and neutrons, are comprised of three fractionally charged objects called quarks, and that another category, mesons, are formed of quark-antiquark pairs. Gell-Mann was awarded the Nobel Prize in physics for this work in 1969. This quark model also allows the existence of other quark composite states, such as pentaquarks composed of four quarks and an antiquark. Until now, however, no conclusive evidence for pentaquarks had been seen.

Professor Wilkinson is one of four speakers at our 14 November day school, all of whom are researchers from each of the four main detectors sited around CERN's Large Hadron Collider. Wilkinson's LHCb is an experiment set up to explore what happened after the Big Bang which allowed matter to survive and build the Universe we inhabit today,

Each speaker will describe how their detectors work, how discoveries (such as the pentaquark) are made, what future discoveries are anticipated, and how their findings may affect the future of physics.

CERN and the Future of Physics takes place on 14 November and is aimed at the general public.

To learn more about the recent pentaquark discovery, please see: