2016 was a year of renewal for Rewley House. It began over the Christmas break one year ago when, in March 2016, we remodeled and reopened our dining rooms and common room. Then the scaffolding went up, both for an exterior clean, and so that our windows could be made more energy efficient.

The scaffolding came down in the autumn, giving a glimpse of what the buildings looked like when they were new, over 140 years ago. Brickwork we’d assumed was dark brown was suddenly revealed in its true colours. 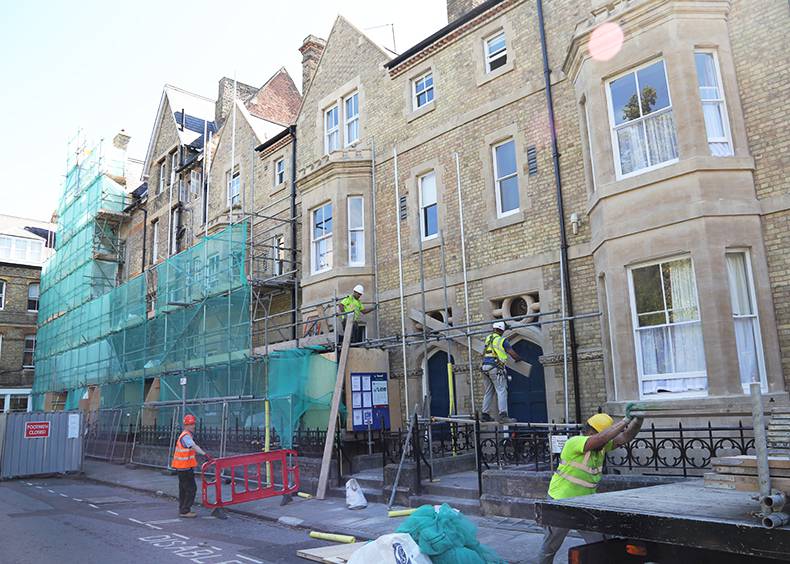 Wellington Square, at the northern end of St. John Street, was built between 1869 and 1876 as a speculative development of mixed domestic housing. This yellow brick is characteristic of the Oxford Building and Investment Company, which had its own brickworks. The company failed in 1883 and its liquidator claimed that it would be 'difficult to find one house built in connection with the company in the previous ten years which was of red brick'. 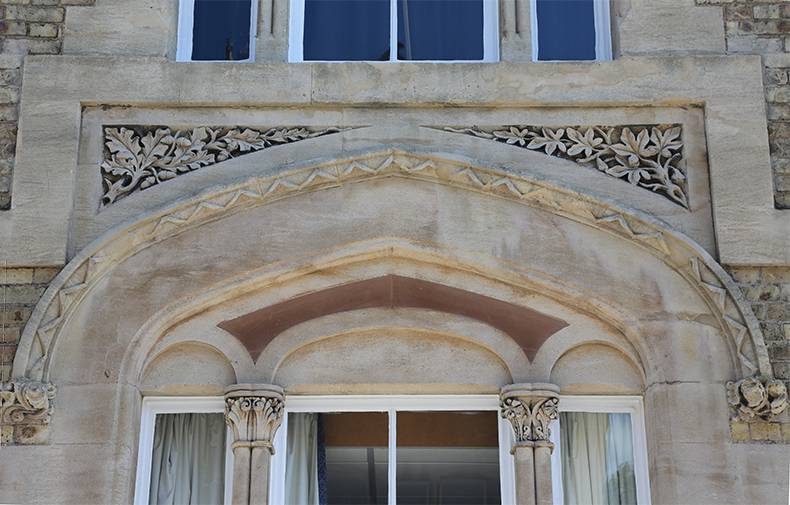 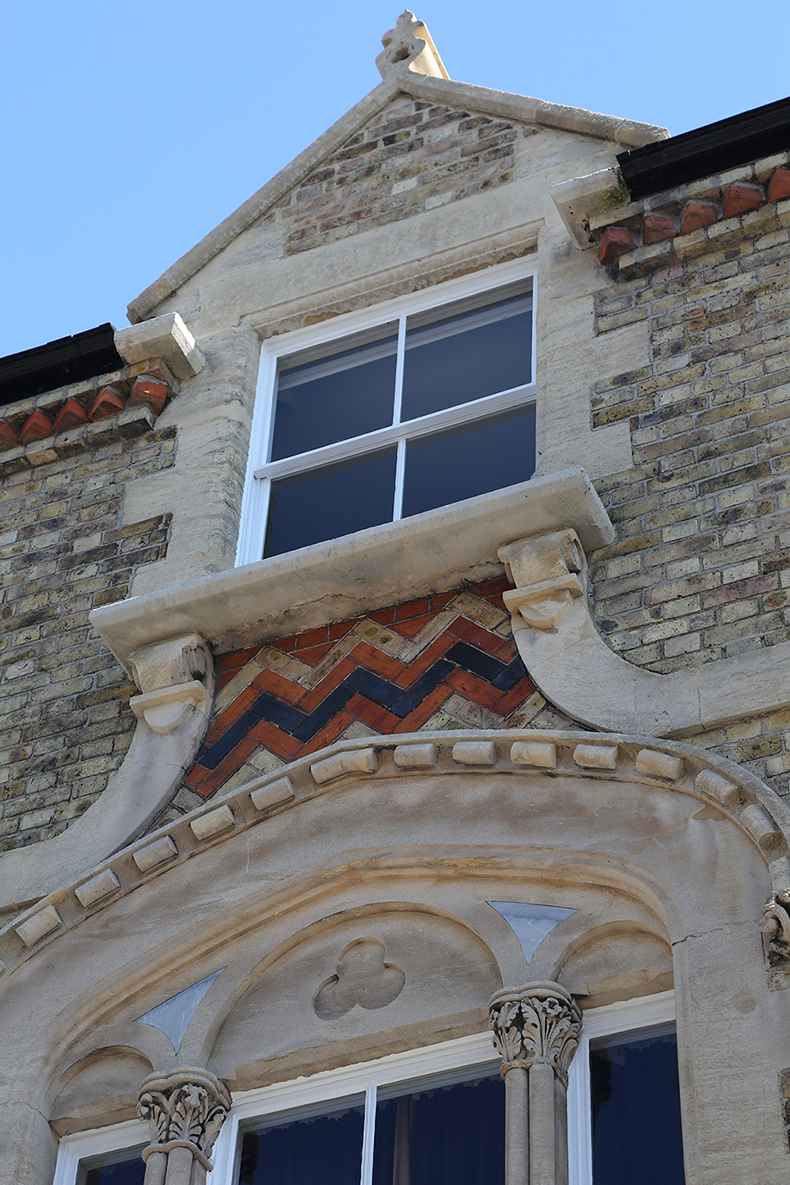 This herringbone brickwork was almost invisible prior to the clean.

Oxford saw a boom during this period of housing built for the 'trading and industrial classes', and census records from 1881 and 1891 tell us that these houses fit the trend. Residents of numbers 1-6 Wellington Squares included a telegram messenger, house painter, a teacher of French, a congregational minister, a shoemaker, a father and son in the Oxford hat and hosiery trade, a retired grocer, several lodgers and a scattering of domestic servants.

Architectural historian Paul Barnwell, noting both the brickwork and stone carvings, said: 'I would have assumed a speculative development for a more affluent class than the census shows – both on the basis of the size of the houses and the amount and quality of the decoration. It is not that decoration, particularly the use of different coloured brick, is unusual for the period (only a little later you will find more modest use in Jericho), but the stone carving is a bit more of a surprise.'

Geoffrey Tyack, Fellow of Kellogg College, noting that the land which became Wellington Square was formerly the site of Oxford's workhouse, commented: 'The area may have been somewhat blighted by the fact that there had been a workhouse on the site.' 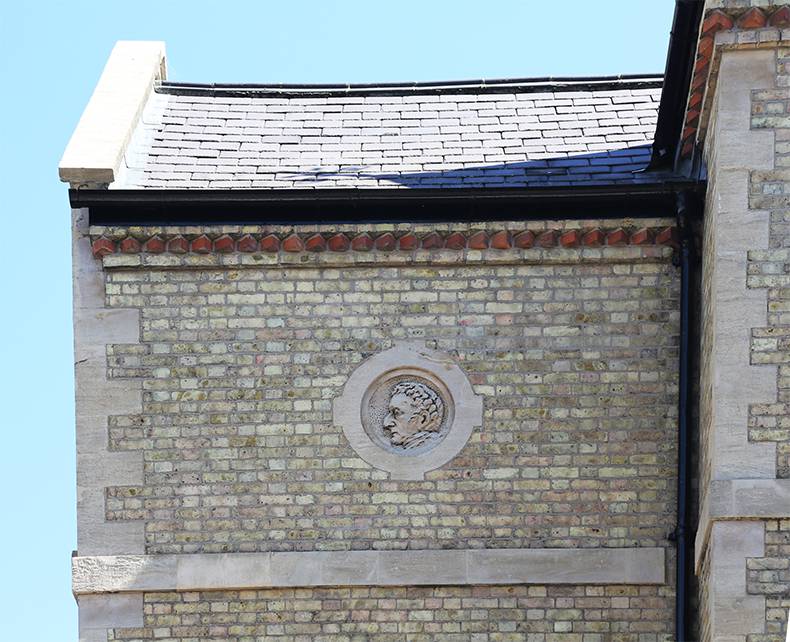 Professor Tom Buchanan has confirmed that the gentleman picture above, whose face appears on the top floor corner of St John Street and overlooks Wellington Square just beyond, is the eponymous Duke of Wellington – though not perhaps the best likeness of him! The Duke was Chancellor of the University of Oxford from 1834-1852.

Number 7 Wellington Square, the former St Anne’s Rewley School, was built in 1873 by architect EG Bruton, who is said also to have designed some of the townhouses. St Anne's Rewley operated as a school until 1904, when it moved to larger premises up the Woodstock Road. The old school building was acquired by the Department in 1927 and was the first of our buildings on Wellington Square. It wasn’t until the 1960s that Department for Continuing Education acquired the townhouses at numbers 1-6 and opened a residential centre for students. 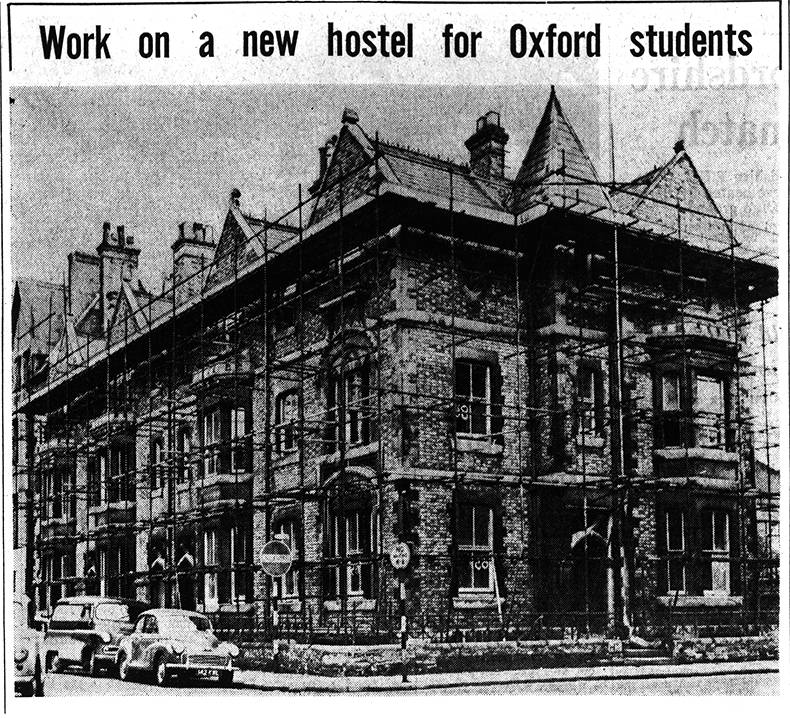