Settling the score for the visually impaired

For the past two years Jonathan Darnborough, our Director of Studies in Music, has taken part in an EU-funded international project called 'Music for Visually Impaired People' - or Music4VIP.

'The aim of this project is to make music much more easily accessible to blind and visually impaired people,' says Jonathan, who is the UK representative on the project.

Jonathan is in the process of authoring the Department's first online Music course - an introductory course in musical analysis. This course, which will be fully accessible to blind and visually impaired people using the technology created by the Music4VIP project, is planned for the academic year 2016.

The challenges
Music is the only totally accessible art for blind people; and yet despite the introduction of school integration, music studies have dramatically declined among the blind in Europe for the past 30 years. 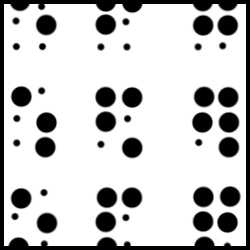 The main reason for this lies in the shortcomings of Braille musical notation.

Printed music scores represent the most important elements of a score visually. These include pitch, note duration, melodic line(s), monophony and polyphony.

All these elements can be represented with Braille - but due to the fact that Braille is based on 64 dot combinations, a Braille score is a merely linear representation of the original, and there is no logical analogy between the Braille symbol and its musical meaning.

This forces the blind to engage in enormous mental work when deciphering Braille scores.

Meaningful access to music for the non-sighted can be achieved only if blind musicians (who traditionally have had to rely on learning a piece only 'by ear') are given access to the full grammatical, lexical and formal aspects of the piece.

The solutions
Recent developments in software have focused on transforming Braille music notation into a far more flexible format.

The software programmes are now able to represent many aspects formerly available only via a visual reading of a score. These include providing a broader overview of a piece's structure, the ability to discern and follow a given melodic line among many others, the ability to filter out all but certain desired elements (e.g. only notes).

Further, adaptive technologies, such as synthesized voice, Braille display, Braille emboss, sound card, interaction with normal keyboard, can be used in combination. This allows the visually impaired to use different methodologies in exploring and navigating scores: Braille and speech together, for instance, or, Braille and listening.

As a result of the Music4VIP project:

The web site for the project is: www.music4vip.org