Inspired on the Department's Egyptian Artefacts course by a lecture from Egyptologist Rosalind Janssen on “Soul Houses of Ancient Egypt”,  students Christine Blanks and Sara Harman undertook an experimental archaeology project to make their own modern-day versions of these Ancient Egyptian fired clay, funerary objects.

Provision for the afterlife was important to the Ancient Egyptians, especially eternal nourishment from food and beer.  In Middle Kingdom Egypt (c. 2,000-1700 BCE) simple dug graves were often the final resting place for the less well-off.  On these graves, relatives appear to have placed what are called “Soul Houses”.

Soul Houses were placed on the surfaces of the graves with the intention that they would provide accommodation and sustenance in the afterlife.  These fired clay models could take many forms  from basic offerings-trays, to replica houses (complete with ancient Egyptian domestic architectural features) to cult chapels.  Many models included courtyards with scupted clay foods, such as oxen heads, beer jars, joints of meat and loaves of bread.  Water tanks and funnels for flowing water were other desirable elements.

Preparing for the challenge

To investigate how the Soul Houses were originally made (and to appreciate the challenges they may have presented to their original makers) Christine and Sara went looking for project partners. They joined forces with Johnny Nuttgens, a professional potter, Liam McNamara, who is Assistant Keeper of Ancient Egypt and Sudan at Oxford's Ashmolean Museum, and Rosalind Janssen, Egyptologist and lecturer.

The first step was to review the literature and the extensive collection held in the stores of the Ashmolean Museum.  The Ashmolean possesses an outstandingly wide selection of these artefacts, many coming from the Egyptologist Flinders Petrie’s excavations in Deir Rifa in 1907.

Viewing and handling the objects revealed the models' construction and their level of detail. For example, some had tiny “post holes” that Flinders Petrie believed originally held minature canopy poles that shaded tiny water tanks.

The original Soul Houses were made from ancient Nile clay. After handling the specimens at the Ashmoleam, potter Johnny Nuttgens set out to replicate the original clay. He combined two types of commercial clay with medium grog, silica sand, straw and a small amount of sievings taken from the floor of the nearby hay barn. The resultant clay was similar to the 4,000 year old original material.

After kneading Johnny’s prepared cones of clay, the team began forming the models, keeping them roughly true to their original size of approximately 50cm by 50cm.

A simpler offering-tray with clay modelled food and water channels was based on one found in El Kab, Egypt by that the archaeologist Quibell. This model was fairly quick to assemble, taking less than an hour to make.

A more complicated two-storey Soul House, copied from one on display in the Ashmolean’s Egyptian Galleries, took around two hours to construct.  A further model was made directly onto hessian sacking, since some Soul Houses show evidence of matting marks imprinted on their bases.

To prevent possible “burn outs” –  in which the straw in the clay mix burns when being fired – the models were  then painted over with slip and given a few days of drying time, before being fired in an electric kiln at a temperature of 900 degrees. This would have been the same temperature, but a different kiln environment, from the ancient Egyptian kilns,  which would probably have been made of clay and fuelled with wood and straw.

Christine Blanks said, 'The process of looking at Soul Houses from the different viewpoints of a literature review, viewing and handling a collection, and then undertaking a practical session really informed us on this topic.  Linking up with professional museum personnel and artisans provided opportunities for informative practical work based on a sound appreciation of the material evidence.' 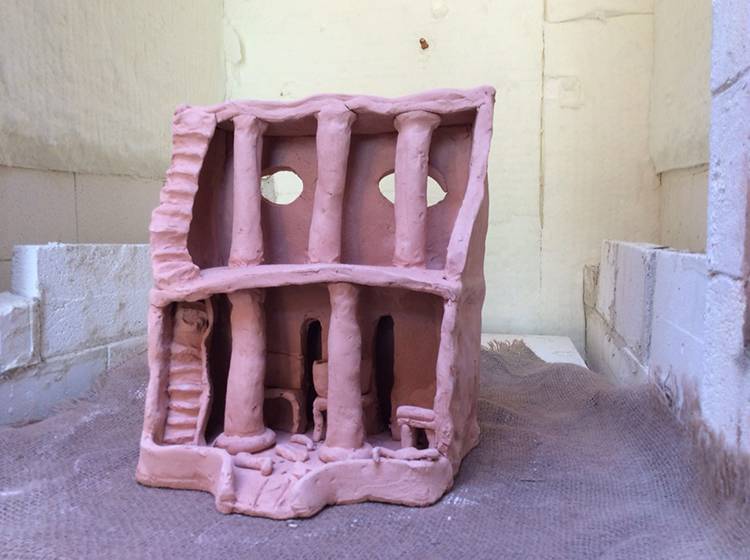 Christine Blanks' two-story Soul House. View a similar, one-storey model can be seen on the website of the Museum of Fine Arts in Boston, and a two-storey version and a 'tray offering' model at the British Museum