In January 2018 we received funding from the University of Oxford's Public Engagement with Research Seed Fund, to carry out the project. We are in the process of contacting local groups to arrange workshops. If you would like to take part please email tara.stubbs@conted.ox.ac.uk

We have been spending the last month or so following up on our call-outs to schools, writing groups and other organisations and arranging workshops. In the next two months we will be running a mini-workshop at the Florence Park Festival, FloFest; running a workshop with a group of poetry enthusiasts (and their less keen partners and friends) in Longworth, Oxfordshire; and setting up a workshop for individuals to attend in central Oxford. We have also made connections with poetry and art groups in Oxfordshire and beyond. We are having less luck appealing to schools, so will reach out again to specific year groups who are not taking examinations at this time of year.

On Saturday last weekend (16th), we ran an 'interactive discussion' around our project, focusing once again on Frost's 'Design' and our visual art and paper/wood sculpture creations that responded to the poem and the questions and ideas the poem and the project raise.

We had a small but focused audience (around 10), as well as two babies (!), and learned some interesting things about people's perceptions of poetry. This took place at FloFest in Florence Park, East Oxford; we were unsure what the audience would consist of but it ended up being quite a spread of people, most of whom were engaged with the ideas (and subsequently signed up for the OUDCE mailling list to hear about our classes). One of the more 'doubting' people was a willing volunteer with the poetry planks in particular, using them as a springboard to demonstrate his longstanding fear/doubts around poetry but also being willing to change these.

We asked three questions when we began:

1) Do you like poetry? About two thirds of the group said that they did.

2) Do you think it is accessible? About half of the group said that it was.

3) Do you think it is useful? Fewer people had thought about this, and so only a couple of people said that they did.

First was that people tended to believe that there is one way of reading a poem, thanks to impressions that they've gleaned at school. Second was that people are very influenced by the way they were taught poetry at school; one woman participant attributed her ongoing love of poetry to an inspiring teacher at school, while others noted that they hadn't been able to access poetry properly since school thanks to 'bad' teaching. Third was that even those people who claim to like poetry are nervous about speaking about it, and have rarely (if ever) thought about it in terms of its 'usefulness' before. These are all very helpful findings going forward, and we hope to put these back into longer workshops where we can assess whether people's attitudes might be altered during the course of a workshop thanks to the methods we employ.

Towards the end of June we held a workshop with a group of women who were part of a Christian fellowship in Oxfordshire. They were interested in issues of friendship and support, and so we chose Seamus Heaney's poem 'Scaffolding' to discuss with them. We began the workshop by discussing Frost's 'Design', which we had circulated before, asking them to respond visually or verbally to this poem. The questions we asked were:

In the second half we gave them Heaney's poem unseen, and framed the discussion around the same questions. I then demonstrated a 'reading' of the poem using principles of close analysis, and Jane brought in some of her artwork as a response to the poem. We decided on this occasion not to bring in the artworks that we had produced during the 'Curiosity Carnival'.

Three weeks after the workshop had concluded, we asked individual participants to send in their feedback. What was most useful was the idea that the participants had felt previous to the workshop that there was one way of reading a poem, and that therefore a reading could be 'right' or 'wrong'. In general, they felt less intimidated about reading poetry after participating in the workshop. It was clear that most of the participants had been given, whether during their education or in discussions with friends and family members, an impression that reading poetry was a skill that had to be learned, and that only certain people were qualified to do this. Our workshop seemed to go some way to correcting this impression.

On the visual art side of things, I think we had less success because the participants were less keen to respond visually to the poem. For the next workshop, therefore, I think we will plan ice-breakers that enable the participants to create visual responses within an encouraging environment. For this workshop we had given them the option of creating visual responses in advance, but only one participant had done this. For the next we'll make this a bigger part of the workshop.

We held a workshop for individuals who had expressed an interest in our project, in my office in Summertown, on a hot day in August. We had contacted several people who had heard about our workshops through different means of advertising, and expected 6 to attend. However only 3 people attended on the day (it is a very difficult time of year to arrange events). For this workshop we asked those attending to read Heaney's ‘Scaffolding’ in advance and bring a visual image that helped them think about the poem. Following this discussion, Jane and I discussed Shelley’s sonnet ‘Ozymandias’ in relation to images that we had collected: mine from my work on sonnets and structures, and Jane from her artistic practice.

We sent the following instructions to the participants:

In advance of the workshop, please read the selected poem, and bring along with you to the workshop a visual response.

This can take the form of a drawing (by yourself or others), a painting that you have seen, a photograph, or an object (or a photograph of that object).

To get you started, you might want to think about the following questions, which help to make connections between the poem and visual art.

Two weeks after the workshop, we wrote to the individual applicants to ask for their feedback, which I’ve summarised below:

- Participant 1 (male, 60s, runs workshops on poetry and visual art): ‘I don’t think the workshop changed my view of poetry very much. I think there is a lot of common ground between us, though I come as it mainly as a practitioner rather than a critic or student. Most of the workshops I attend are focussed on writing rather than reading. They naturally involve participation in activity (writing) which then gets shared and discussed. I think in any context that active element to learning is important, and part of its pleasure. So I would include some kind of active task to engage with either individually or in small groups – though on the day we were such a small group that is would have made such a structure a bit artificial.'

- Participant 2 (male, 70s, attends classes on poetry at OUDCE): ‘I thoroughly enjoyed the workshop, not least your success in sustaining a relaxed and engaging conversation throughout the afternoon. There’s little I would change in your approach, except perhaps the idea which emerged in discussion, that the poems to be considered might be anonymised.

Jane’s suggesting alternative words in “Scaffolding” was refreshing. Although, in attempting to write verse, we’re well used to chopping and changing the language, engaging in such an exercise with a poem from "the canon" felt almost transgressive - but liberating. It also prompted us to appreciate why “old bridges” failed to fit the overall structure of the poem. Ignorance of the author might promote more “creativity” in a workshop.

Without the “backstory” - my friends’ wedding after more than a dozen years of living together and renovating their home - my photo of a house under scaffolding simply illustrated the words on the page. However, I thought the masonry images helped open up the layers of complexity in the Shelley.’

- Participant 3 (female, 30s, interested in poetry but a bit nervous about discussing it; interests in classical civilization): ‘The workshop didn’t change my view of poetry so much as provide a different way of exploring and engaging with it.

I find thinking about visual language/images valuable. It encourages spending time with a poem in a different way to, say, a more analytical close reading of it and creates space for exploring whatever images a poem brings to mind. Discussing these different images with others helps open things out and offers interesting insights. It also seems to naturally lead into some exploration of structure, form, context etc of poetry without this feeling forced or didactic. (I’d love to see this done in schools!) It also validates the idea that the real life of a poem lies in whatever way the poem resonates with a reader.

I valued the way you both created space for everyone’s voices to be heard. I’d love a workshop in more of an art studio environment that offered similar discussion but also more time and space for creative exploration of visual language and images from poetry, say with images provided and brought along by participants and other (eg sculptural, photographic, drawing) materials to play with actually creating visual representations. (It would be amazing to see this interdisciplinary approach explored with music, movement/dance etc too).

I’d also be interested in more exploration of playfulness in the context of encouraging more widespread engagement with poetry. One of my strongest feelings as my oldest child is about to start school is that he’ll enter an environment where what counts as “play” and “work/learning” is very clearly demarcated and labeled as such, perhaps to the detriment of his current playful (unintimidated) engagement with absolutely everything. Creating spaces where adults can playfully engage with poetry seems part of the process of crumbling the intimidating walls that, for many people, seem to surround it.’

Our project took a hiatus as I (Tara) gave birth not long after that last event, but we have since re-started the project with an aim of focusing on the ways in which poetry can engage with the public during the Coronavirus crisis - a time when most of us are staying at home and/or self-isolating. Check out our main 'Poetry and Stucture' page for poems, visuals and our thoughts about them. 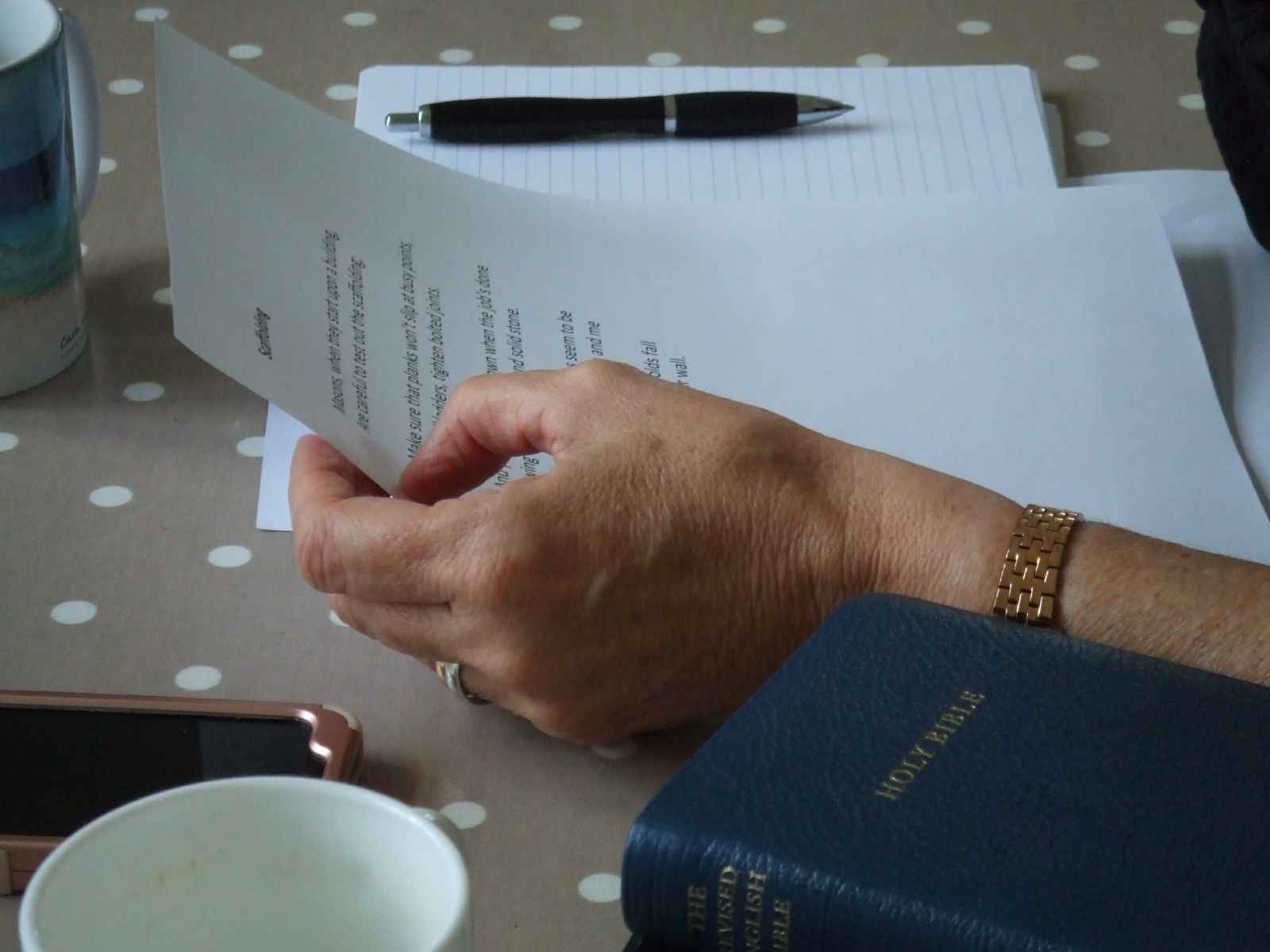 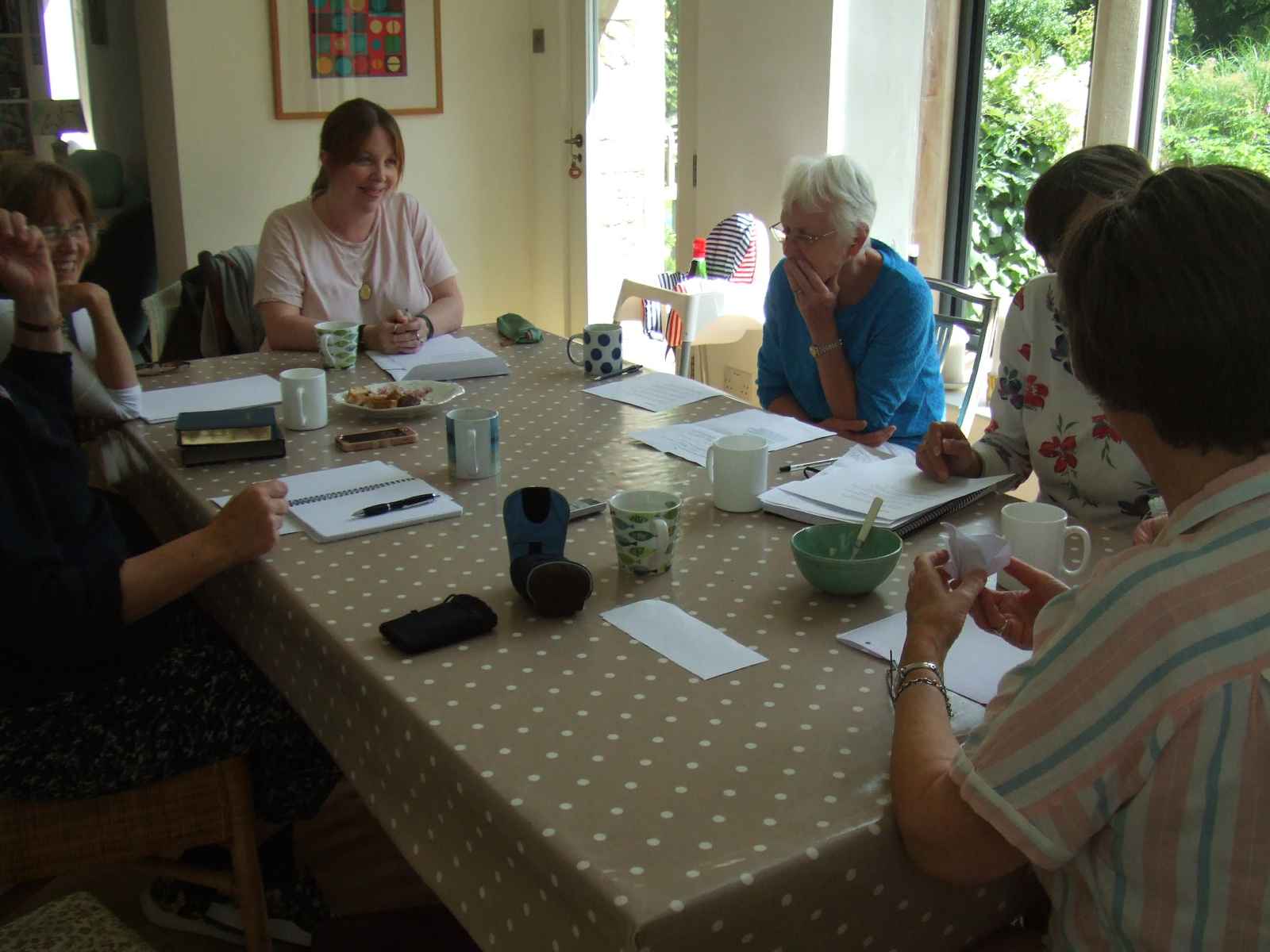 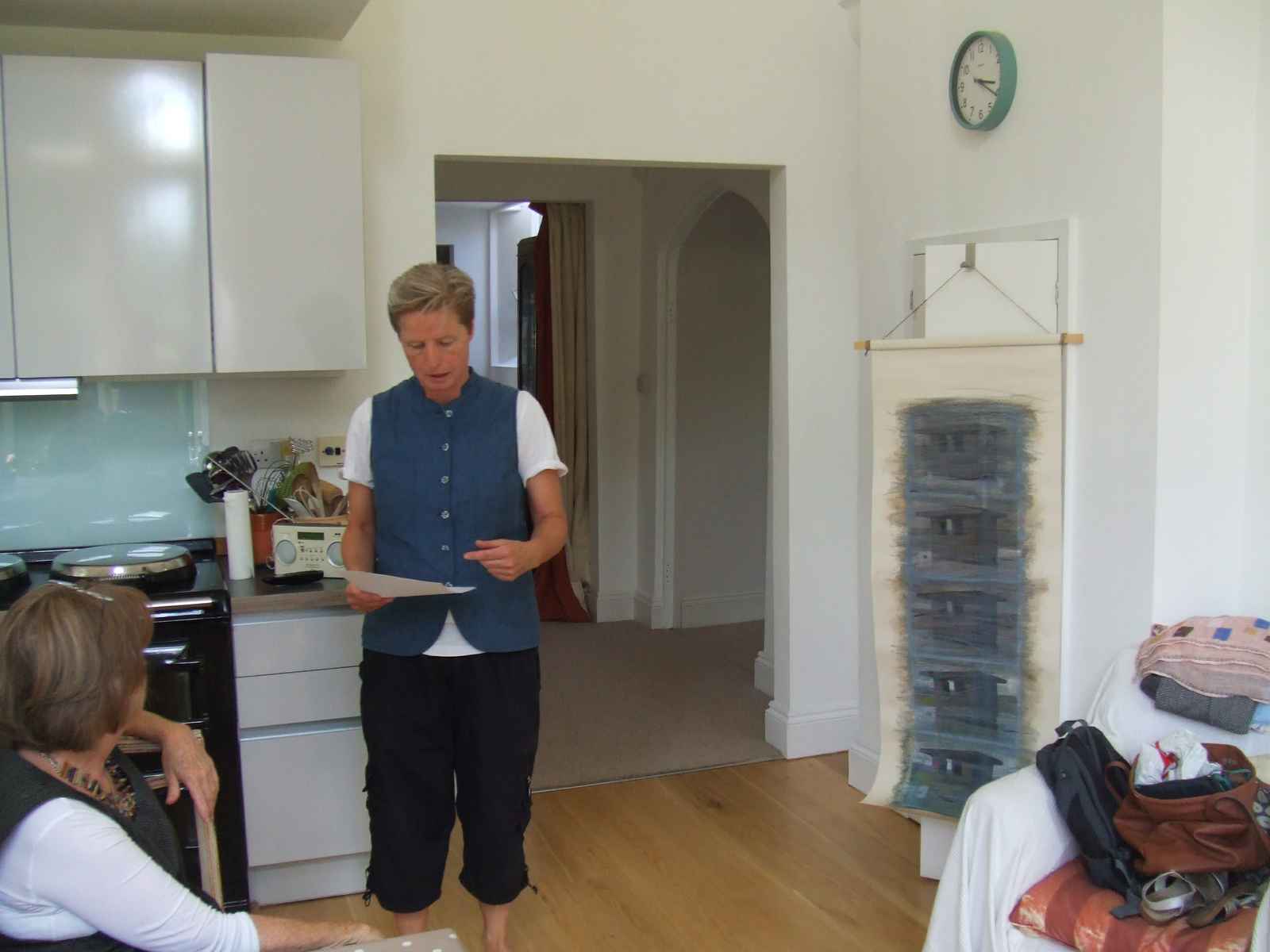 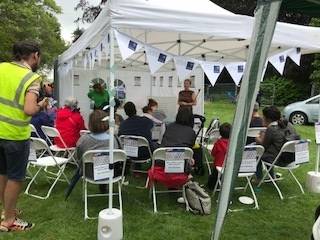 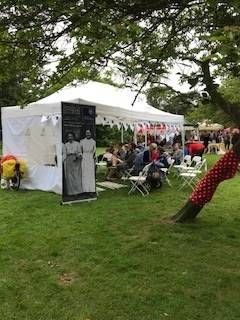 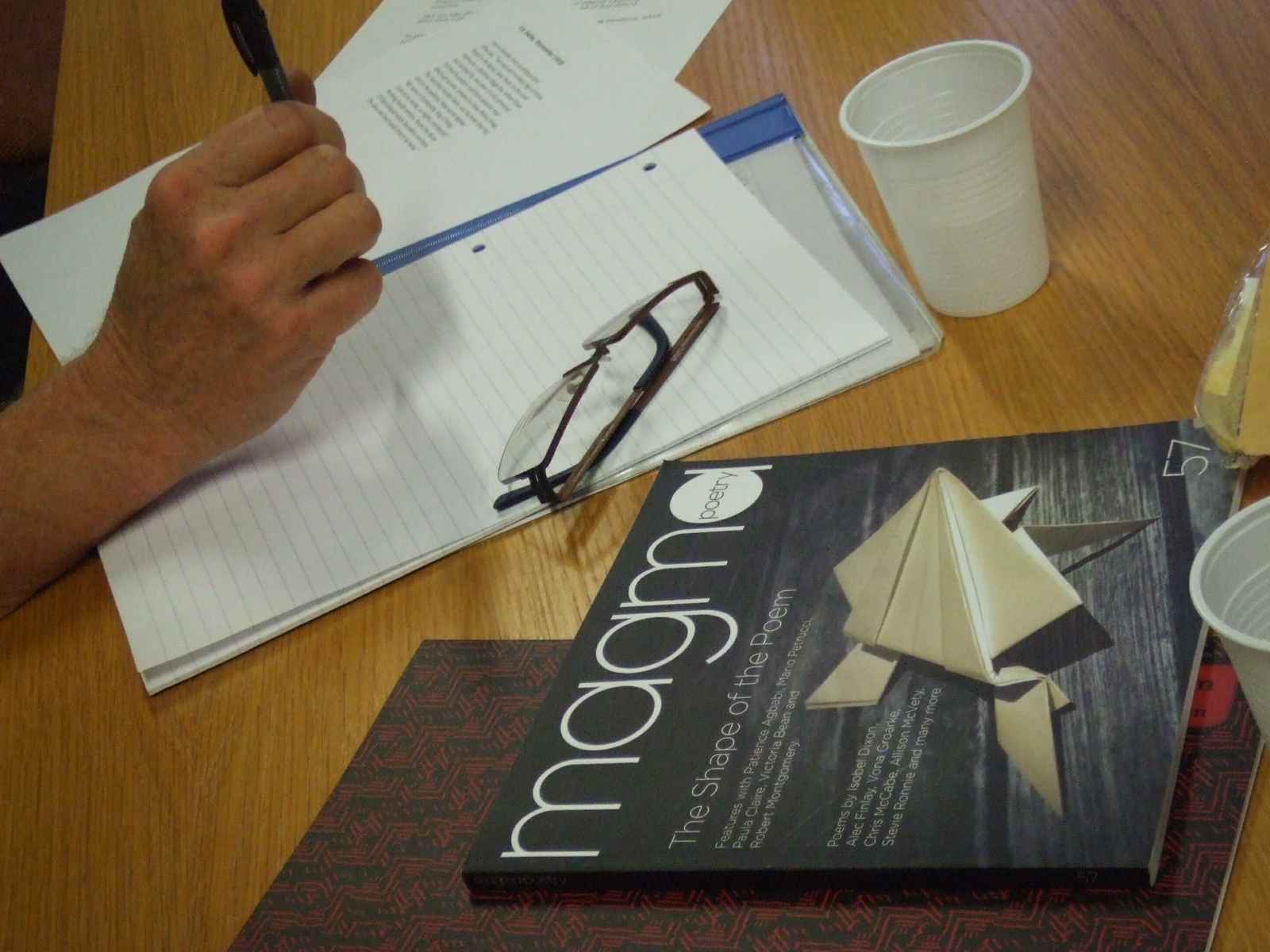